The Return Of June Bugs: What This Means For Your Facility

Copesan > Resources > Blog > Education > The Return Of June Bugs: What This Means For Your Facility
Get Started
Previous Next

The Return Of June Bugs: What This Means For Your Facility 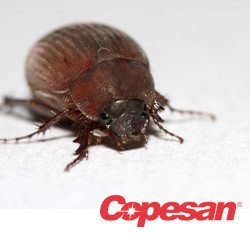 The term “June Bug” is a bit of a misnomer as it appears at other times in the year and is also sometimes referred to as a May Beetle. That being said, the “June” bug can make its appearance anywhere from May to early July with the heaviest occurrence taking place in the month of June. The June Bug is a nocturnal beetle that hatches from a larvae in the springtime of the year. The female will lay from 60-75 eggs underground. After about 18 days, the eggs hatch out and the newly hatched larvae spend the next nine months going through three stages of larval growth and finally emerge in the spring as a newly hatched June bug. The larvae are a delicacy to a variety of mammals including skunks, moles and birds. Fishermen also love using them for fish bait.

Even though the June Bug is nocturnal, it is attracted to bright lights. They will gather around security lights, well-lit windows and porch lights. This over exposure to light is believed to sometimes kill the June Bug and they are very often found lying dead the next day under lights and brightly lit windows.

While the June bug is not known to be of any danger to humans, they do pose problems and can be a nuisance to business owners. The beetle is quite noisy as it flies around bright lights and, to some people, can even be a little frightening. This flying, buzzing pest is especially annoying to business owners whose customers try to enter a brightly lit commercial facility.

Other problems created by the June bug affect the commercial real estate outside the building. The June bug can be very destructive in defoliating trees and shrubs. Again, the June bug is nocturnal and eats the leaves of your favorite trees and shrubs during the night and then disappears during daylight hours making it difficult to control beetles. The June bug performs additional damage in the larval stage of growth as they attack the roots of lawns and farm crops.

Copesan provides commercial pest control solutions that can take care of all sorts of pest problems, including the June bug. It is possible to place beetle traps around bright lights to catch and dispose of the adult bug. However, any other means of eradication must be directed to the larvae, sometimes referred to as white grub. It must be determined as to whether there are enough larvae present to justify treatment with an insecticide. Copesan’s local experts can guide you through this process. For more information on Copesan’s services, contact us today!

Leverage Our Local Expertise. Copesan has more than 100 degreed technical experts ready to share their knowledge. Whether your question is specific or broad, we have the answers from experts who truly understand the challenges of your area.