The “Murder Hornet” and the Impact of Invading Pests

The “Murder Hornet” and the Impact of Invading Pests

“Murder hornets,” more commonly known as Asian giant hornets (Vespa mandarinia), have been generating lots of buzz (pardon the pun) on social media and in the news, following a reported finding of two hornets in Washington State. With countless pieces of information circulating through these channels, it can be difficult to decipher the facts on this invasive species.

What We Know About the “Murder Hornet”

We know Asian giant hornets are very social insects, yet they are often solitary predators. Many people are fearful that Asian giant hornets can deliver enough stings in succession to harm, and even kill, humans, earning them the gruesome moniker of “murder hornet.”. However, in reality, these hornets usually eat other arthropods, such as spiders and beetles. Some situations will arise in which the hornets will attack en masse, typically when targeting honey bees, yellowjackets and paper wasps colonies. They usually target these concentrated sources of protein when they need to feed their own larvae in late summer and early fall. However, it is still unknown if the hornets will behave in the same way here in the US as they would in their native region. These hornets nest in the ground, which can make them difficult to find.

The United States Department of Agriculture (USDA) New Pest Response Guidelines provides extensive information about the Asian giant hornet and the efforts to contain it. Below are a few highlights from the publication to answer some common questions about the origin of this invasive species and actions to take in the highly unlikely event that you encounter one.

More on Invasive Species in the United States

Most invasive species are agricultural and nuisance pests in nature. They are typically not dangerous, with the possible exception of the recently discovered Asian longhorned tick (Haemaphysalis longicornis), which transmits a number of diseases in its native range but hasn’t yet been shown to do so in the US.

Asian giant hornets are a different type of invasive pest than commonly found in the US. The closest example would be the Africanized “killer” bees, which hybridized with honey bees in parts of the US, but have not turned out to be nearly the public safety risk originally predicted.

The presence of invasive species does beg the question of how new pests are introduced to the United States. Most invasive pests arrive one of three ways:

However, once these pests arrive in a new environment, it is not guaranteed they will thrive there. It is highly likely there are non-native insects and invertebrates arriving in the US every day, but not surviving due to unfavorable changes in food or climate conditions or consumption by unfamiliar predators.

Species that arrive to the US and thrive are usually generalist feeders on plants or other invertebrates, so they can survive even if they aren’t following their normal diet. Invasive species often benefit from an insufficient number or complete lack of predators and a solid food ecosystem already in place that does not include them. We have seen several invasive pest populations explode in an area for two to three years, and then start to level off, as predator populations have adjusted and identified the invasive species as new food source potential and management strategies are implemented.

Concerned about the Asian giant hornet? We encourage you to stay informed and follow the guidelines presented by the USDA. If you suspect you have seen an Asian giant hornet, please contact the USDA or your local state extension office. 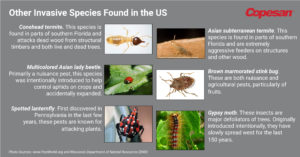