As the seasons change, so do pest pressures! While stinging insects are seen throughout the spring and summer, they become more of a nuisance during the late summer and early fall. This is a result of more established colonies and worker insects foraging to ensure a solid food supply for overwintering. This increased activity can lead to more aggressive insects and a heightened threat to the safety of your business, your employees and your customers.

Fortunately, there are steps businesses can take to reduce attracting stinging insects.

Common stinging insects include yellow jackets, paper wasps, honeybees, hornets and bumblebees. Depending on the species, these pests may nest in the ground or in trees near the entrance of your building.

It can be challenging to differentiate between different types of stinging insects. However, it is important to educate your employees on these pests so they can properly identify them when reporting activity to your pest management professional.

A yellowjacket’s distinct coloring makes it easier to identify them among other wasps. While patterns may vary between species, yellowjackets typically have a yellow and black stripe zigzag pattern that extends from head to abdomen. Yellowjackets have smooth, elongated bodies instead of a fuzzy, stocky appearance. Yellowjacket stings pose significant health threats to humans. These insects are territorial and will sting if threatened. Unlike bees, which can only sting once since they inject their stinger into you, yellowjackets can sting multiple times and can cause allergic reactions. 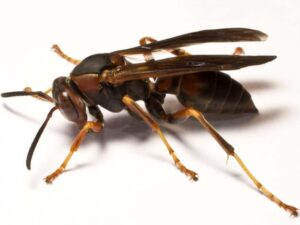 Paper wasps are often easy to confuse with yellowjackets, as they can share similar physical attributes depending on species. One distinguishing physical trait between the two is the orange tipped antennae of paper wasps, while yellowjacket antennae are uniformly black. Another varying trait is their leg position while in flight. Paper wasp legs dangle whereas yellowjackets tuck their legs under their bodies. Identification between the two is often accomplished by looking at their nests. Paper wasp nests resemble an open honeycomb and are often described as looking like an upside-down umbrella.  On the other hand, a yellowjacket nest is often underground and not visible in plain view.

Honey bees can differ in color depending on the region. Some honeybees look almost all black, but most commonly they will have black stripes alternating with bands of amber/brown hairs and will measure around one-half to three-fourths of an inch. The easiest way to differentiate a honey bee from other stinging insects is to look at the shape of their thorax and abdomen. Honey bees have a distinctive barrel-shaped body and don’t have a thin mid, or obviously segmented, section between the thorax and abdomen like other insects. Habitat and location may also help in identification.  Wasps and other carnivorous insects will be attracted to human food and refuse, outdoor dining, trash receptacles. Honey bees, however, normally won’t come around human food and refuse but may be attracted by nearby flowers or other sweet scents.

These insects are not true hornets and are instead more closely related yellow jackets. This large wasp gets is common name from their ivory-white face coloration. 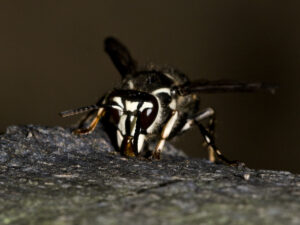 Workers grow up to 15mm, and queens can grow up to 20mm. They are mostly black from head to abdomen and have patterns of white bands on their body segments. Perhaps the most recognizable feature of the bald faced hornet are their large, bulbous aerial nests which can be found attached to tree branches at varying heights, and often times on the eaves of structures.  While mostly benign, bald faced hornets can quickly become very aggressive if they, or their nest, is disturbed or threatened. 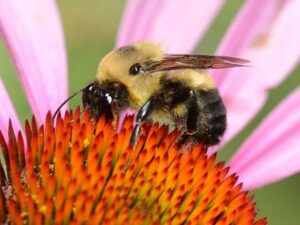 Bumblebees, the largest of all bees, are pollinating superheroes. While many associate pollination with honey bees; bumblebees are more efficient pollinators as they mainly forage for pollen rather than nectar. This lends itself to more pollen transfer to flower pistils each time a bumble visits a particular plant.  Most bumblebees are approximately 1” long with round, fuzzy bodies and short stubby wings. Because of their size, they can often be misidentified as Eastern carpenter bees.  While the two share a similar shape and size, bumblebees have yellow hairs on its abdomen and carpenter bee abdomens are shiny and black with almost no visible hairs.

The treatment for these pests is dependent on the type of stinging insects invading your property. The best way to treat an existing problem and prevent future problems is to get help from a professional. Pest management professionals can carefully eliminate stinging insects and provide preventative services to keep your business, your employees and your customers safe.